Preston Innovations and Sonubaits’ Jordan Holloway demonstrates how to get the most from the short pole line when targeting skimmers and bream during the winter months.

Targeting silverfish on commercial venues during late autumn and winter is well and truly in vogue these days. In fact, as temperatures drop and the carp within these venues start to shut up shop, the opposite can usually be said about the feeding habits of other species that inhabit these lakes. Skimmers, bream, roach and other silverfish will more often than not be the dominant feeding species at this time of year following a long summer of being neglected by the angler and only getting to eat what the more aggressive feeding carp have left behind. You join me today at Moorlands Farm Fishery in Kidderminster where I’ll be taking part in a silverfish league over the winter months and here is my biggest edge when competing in such events… 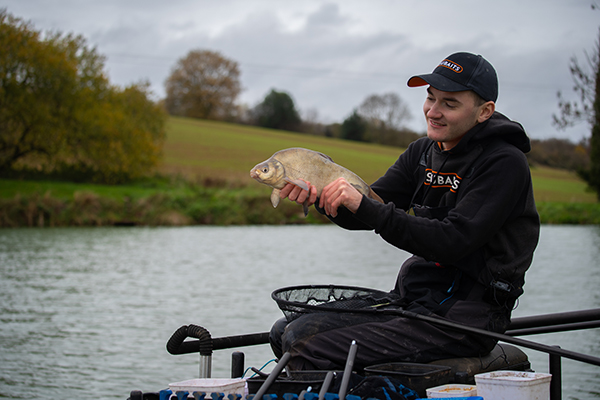 ‘The short pole line’ may instantly give you a preconceived idea of a certain amount of sections of pole or distance from the bank, for many this may be a top kit plus two sections, maybe even a top kit plus three. But much more consideration of where you position this line is required than simply adding sections and fishing wherever that puts you, in my opinion. In fact, for me it is all about depth, a rule I have hardwired into my angling brain and before anything I will ship out and find the deepest part of my peg where the lakebed is flat. Shipping out to 13m on Bank Pool here at Moorlands reveals this flat area of the lake and a depth of around six and a half feet can be found. This is an area I would often look to target early in the session when fish are unlikely to want to come too close to where I am sat, having clattered my gear on the bank and spent the previous 30 minutes or longer moving around my peg and getting set up. My next move is to find a depth around 12in shallower than this ‘full depth’. This brings me up the near slope a little into an area of the peg out of the main bowl where the bottom is clean and largely silt free. Importantly though, I don’t want this to be on too steep a slope so have a good plumb around, most lakes are dug to have shelves and slopes but should there be very little in the way of underwater features then I’d have to look at water clarity and settle on a distance I felt comfortable with on the day. Today’s peg, however, is very shallow close to the bank, sloping off fairly gradually to the deepest part of the peg where it flattens out around 9/10m from the bank. My optimum depth which is five and a half feet deep can be found with three sections plus a top kit of my Preston Innovations XS90 pole, a nice comfortable distance that will also allow me to loose feed with very little trouble despite the strong crosswind, it is this line I will be focusing on today… 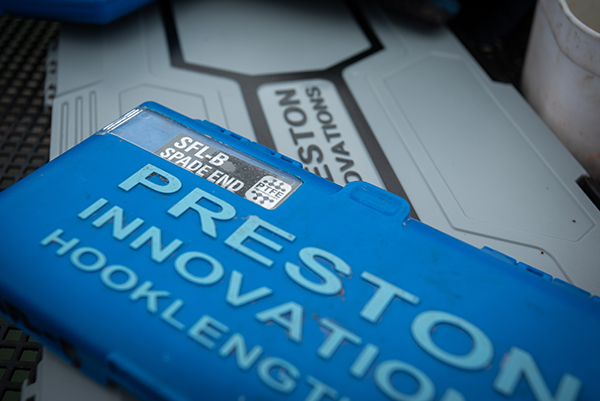 It is no secret that the short pole line is a good place to target silverfish and that isn’t just limited to the cooler months. But often this area of the peg is seen as a place to target smaller fish, roach and the like that can be shipped in quickly to build a weight. Often, it is seen as a line to target should skimmers and bream not be playing ball further out on a ‘main line,’ a busy fools route to success, some may say. I’d be lying if I claimed I wasn’t also of this mindset not too long ago, but over the last couple of years, fishing at venues such as Hallcroft and Larford I have come to realise that this shorter pole line is in fact the best area of the peg to really put together a match winning silverfish haul and those anglers thinking all their bonus silverfish will come from a longer pole line are really missing a trick! To get the most from this line can involve a degree of patience as it doesn’t always kick in instantly, and how I feed it reflects that. Unlike further out in the lake where I will tend to stray on the side of caution with my feeding, small balls of groundbait or a sprinkle of micro pellets. Here, I feel I can feed a large quantity of bait right from the off, to firstly draw fish in but importantly hold them once they do arrive. This is why fishing out of the more silty areas of the peg is so important as should a lot of fish turn up the last thing I want is for them to start digging into the silt resulting in lots of activity and very little in the way of fish picking up the larger particles in the peg.

There is a 1kg groundbait limit at Moorlands and has only recently been allowed in the bait rules, but despite this early heavy feed, it’s rare I’d feed the full kilogram. The mix itself is 50:50 Sonubaits F1 Dark and Pro Super Sweet. F1 Dark is the ultimate skimmer and bream groundbait, dark in colour and sweet in flavour with little in the way of food content. Super Sweet as the name suggests is incredibly sweet in flavour which I feel helps draw more fish into the peg. I purposely don’t introduce a mix strong in fishmeal as I don’t want F1s and carp to get drawn in during these silverfish only events, it’s inevitable that you’ll get the occasional visit but it’s all about keeping that to a minimum! The groundbait is mixed on the damp side, just over a pint of water is added to the three pints of dry ingredient, mixed in and left to settle for around 15minutes before being passed through a riddle. The result is a dark mix with odd flecks of red that comes from the Super Sweet and a beautiful caramel-like smell – absolutely perfect. 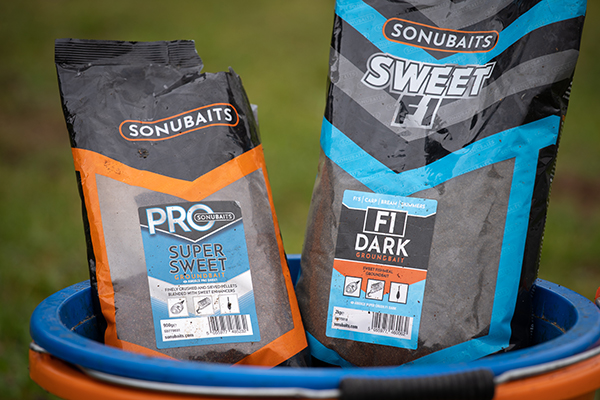 To kick the swim off I like to sandcastle three pots of the mix with a few dead maggots and a few casters. By this I mean I will feed the groundbait loose rather than squeezing it into a ball. The damp nature of how I have mixed the groundbait will help it to sink quickly without creating too much of a cloud as it falls through the water column but will spread over a slightly larger area and give the fish something to graze over than should I have fed it in a ball.

Rigs are kept simple, although I do like to set a couple up to give myself some scope for switching things up during the session. Conditions are again a factor here, so wind and tow need to be taken into account, in the depth I am faced with I wouldn’t be scared of going as heavy as 1g plus, or at the opposite end of scale dropping right down to a 4x10 should conditions allow. The key is I’ll fish as light as I can without hindering on presentation. Both rigs for today feature Preston Innovations F1 Maggot floats, there is a brisk crosswind and the lake is towing in the opposite direction but having had a little play around I have found I can hold still nicely with a 4x12 sized float. I have also set up a 4x14 option just in case the wind gets up or if the fishing is very good. Both are tied to 0.12mm Accu Power mainline and feature six inch 0.09mm diameter hooklengths to a size 18 SFL-B hook pattern. This will be used with hookbaits such as a single or double maggot a maggot and a pinkie or a caster. Shotting for both rigs is a simple bulk with two No10 droppers, my bottom dropper being just above my hooklength loop, second six inches above that and my bulk seven inches above. This spacing helps negate any risk of my hook wrapping over my bulk as the rig settles. I then like to add No12 or 13 Stotz to the rig to really get it dotted down nicely. A No6 Slip elastic is used on both setups. 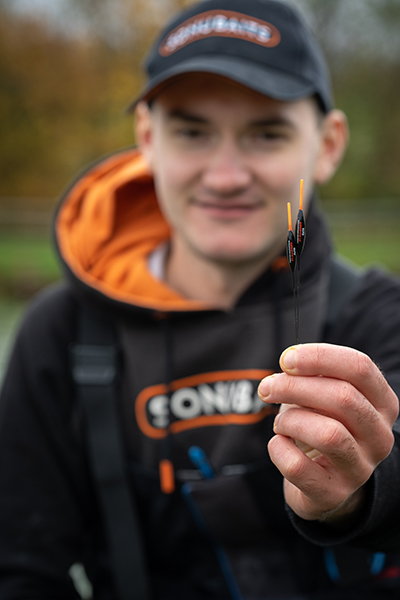 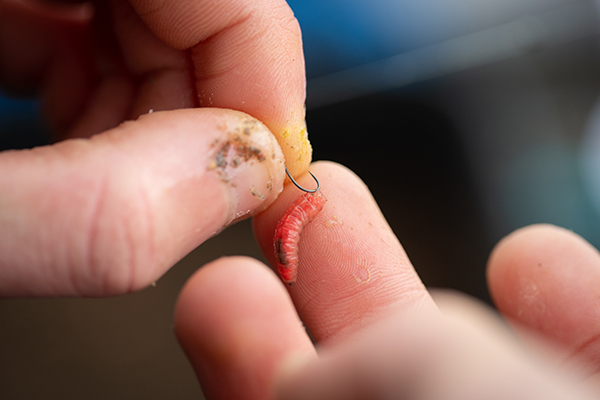 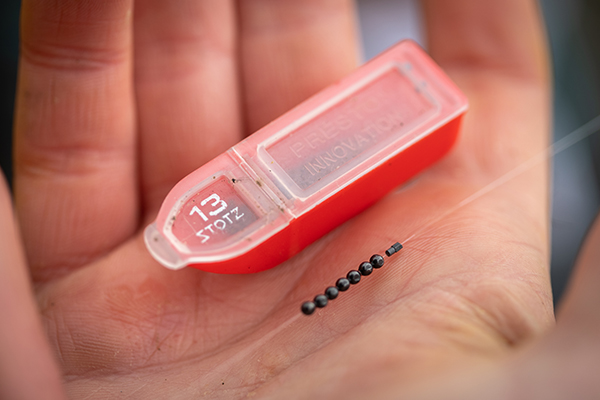 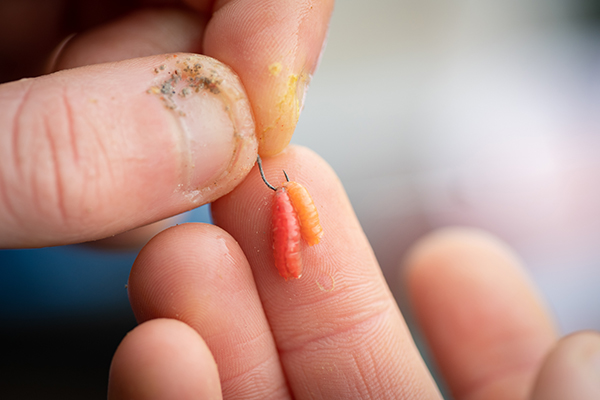 After my initial feed of three pots of groundbait on the short line it’s a case of playing the waiting game and making best use of my other lines further out. There are no hard and fast rules as when to drop onto the short line, sometimes it can be brilliant after just 30 minutes or so and you never look back, whereas on tougher days or in tightly pegged match situations it may take a number of hours before the fish will venture close in to feed. It is therefore important to keep looking out for signs of fish making an appearance short, small bubbles breaking the surface or other anglers catching short are visual cues, but aren’t always there to see and regularly picking your short line rig up to have a look will quickly give you the answer you’re looking for. You also have to be careful not to drop in and plunder this line too soon and risk spooking the fish before they settle properly, have an early look, but be cautious and if bites don’t come, don’t sit on it for too long.

Today however, the long pole line produced a number of smaller skimmers but the action was slow and the stamp of fish wasn’t what I knew the lake could offer. So, being the only anglers on the lake I made the early decision to look short. We have had a couple of frosts so far this year but it hasn’t been cold per se, so I got the impression the fish may still be looking to feed out of the very deepest water. I had been flicking a few casters over this line regularly since the start of the session to ensure I was keeping a few loose offerings going in to keep any settling fish occupied and it didn’t take long for my first fish as the float settled, a skimmer approaching the pound mark, not massive but certainly bigger than those caught further out. Over the next three hours the fishing just got better and better. Loose feeding casters proved effective and a maggot tipped with a pinkie the best hookbait, although other baits also caught me fish during the day. Bites kept coming and a small top up of groundbait seemed to focus the bigger fish if indications did begin to slow. As the session progressed it seemed every bite resulted in a proper bream upwards of 2lb, absolutely superb fishing with bites fairly delicate on my floats bristle. The result was a near 60lb haul at the end of the day. A great session here at Moorlands that just goes to prove how effective the short line can be for skimmer success! 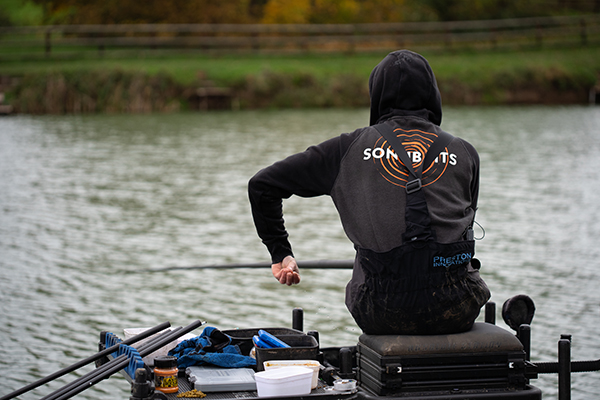 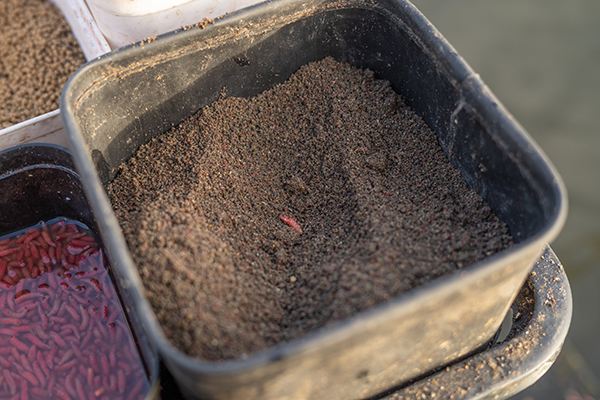 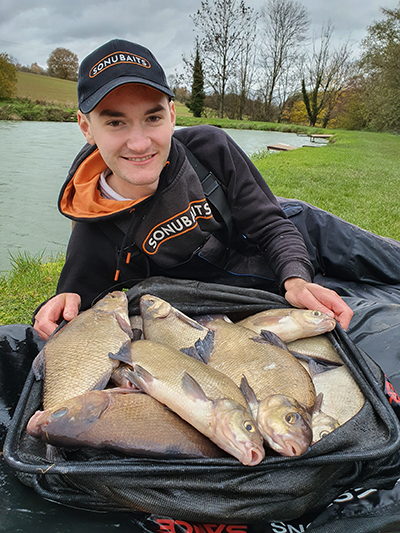 How to Use Lava Rocks